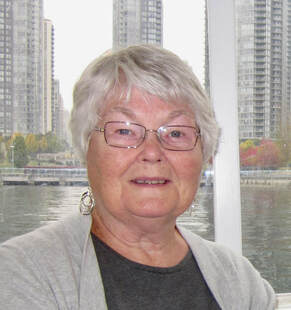 
​Betty Keller, born in Vancouver, BC, has lived on the West Coast, in the Okanagan and the Kootenays. For many years she taught high school English and drama (1963-1975), then served as a faculty associate at Simon Fraser University (1975-76, 1978-79), and taught creative writing as a sessional lecturer at the University of British Columbia (1981, 1982, 1985). She gained an international perspective by serving as a teacher of English in Nigeria (1977-78). Since moving to the Sunshine Coast in 1980, Betty has taken a keen interest in all things pertaining to the written arts—authoring or co-authoring seventeen books ranging from biographies and histories to plays and novels as well as substantive editing more than a hundred books and mentoring a growing list of writers. She was in the forefront of the establishment of the renowned Festival of the Written Arts (which she produced from 1983 to 1994) and the Sunshine Coast Writers-in-Residence Program.
Betty has won numerous awards for her participation in the province’s literary scene. As well as two BC Book prizes, her awards include:

​   the Gillian Lowndes Memorial Award for contributions to the cultural life of the Sunshine Coast. 1985

the Lescarbot Award “in recognition of her outstanding contributions to regional cultural activities.” 1991

the Commemorative Medal for the 125th Anniversary of the Confederation of Canada for her “significant contribution to compatriots, community and to Canada.” 1992

the Gray Campbell Distinguished Service Award by the Association of Book Publishers of BC “in recognition of her work as a writer, editor, mentor and teacher and as founder of the Festival of the Written Arts and the Writers-in-Residence Program.” 2017

the George Woodcock Lifetime Achievement Award “for an outstanding literary career in British Columbia” by the Vancouver Public Library and Pacific BookWorld News Society. The jury statement commended “her contributions to BC as a writer, editor, teacher, arts activist and organizer.” 2021